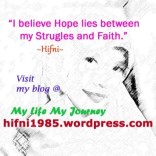 Don’t generalize as excuse!
Some people generalize some negative actions saying everyone behave the same.
I beg to differ.
You’re just excusing your behavior and framing others.

One example is the saying that every men is bound to be attracted to several women. So some men use this statement to justify their actions of flirting with many different women. Is that true? So what about men who stayed loyal to their significant other. Are you saying they are not men? Truth is those flirty men are just not man enough to admit they are jerks.
Don’t be a coward and admit you’re wrong when you’re wrong.